This week on the bookish internet, it was #diverseathon – a readathon where people were encouraged to pick up diverse books. To me the controversy which caused #diverseathon to be born (a ranting, incoherent, hate-filled video which is definitely not worth your time) is in part a testament to the incredible work that has been done in the book community – especially online and with younger audiences. The virulent response against advocacy for diverse authors and books reflects the frustration of some people that conversations about diversity in literature are having a meaningful impact on the community, as well as the publishing and books industry.

While I follow conversations about social inequality in a range of contexts, I honestly feel like the book community is pretty unique in how it addresses this issue. There is a greater emphasis on the personal responsibility to ensure that we are reading diversely and actively supporting diverse authors which I haven’t seen as much elsewhere. This isn’t to say that the community doesn’t face numerous issues in its attempts to increase diversity, of course it is nowhere near perfect. But outside of this community, having a sustained personal commitment to diverse media consumption isn’t really something we talk about all that often.

I think it’s important for individuals who care about social issues to have a commitment to equality and representation reflected in what media we consume. I’ve been passionate about diversity in media for a long time, but I only really started putting in effort to make sure that I was giving creators of and works about people of colour and the LGBTIQ community their due space in my media consumption a little over a year ago. It’s not that there wasn’t any diversity in what I read, watched, and listened to – but diversity was the exception rather than the rule. Because it was based on whim rather than made a priority, I was still mostly hearing from white and straight voices.

So, as we come to the end of #diverseathon, I wanted to write this post to provide some pointers on how we can continue to integrate and prioritise diversity as an everyday part of our media lives. These are strategies and methods that I’ve found helpful, and that I hope it will also be helpful to people who are new to this conversation and are unsure of where to start. And while many of my examples will focus on books, I hope that my experiences will be transferable and valuable to other media as well.

Figure out where the problem lies

The truth is that it’s everywhere. You are going to find barriers to encountering diverse media at every stage of the process you use to select whatever you’re going to read, watch, or listen to next. There are certainly structural issues that are incredibly difficult to overcome – who’s work is chosen and whether it’s released by a big conglomerate or a tiny independent company, what work gets a strong promotional push and what doesn’t, so on and so forth. But as a modern day consumer who has access to a wonderful thing called the internet, you also have a lot of power to overcome these barriers.

I have used a couple of strategies to improve the diversity of the books I read. The first was changing how I discovered books. You may have noticed from my previous posts that I’m a little obsessed with Book Riot. That’s because they have a great track record of promoting diverse authors and having meaningful conversations about diversity in the publishing industry. By choosing to follow publications that prioritise diversity, it improves my chances of being introduced to diverse authors and their books. I also follow a lot of creators and commentators on Twitter who are committed to diversity in all kinds of media, and will signal boost anything that look great.

Another was changing how I acquire books. I am a big fan of buying books in person – not only are bookstores one of the closest things to heaven on earth, but the ability to screen physical copies for any flaws before I purchase them also satisfies my perfectionist tendencies. But unfortunately, even when I had a sizable list of books by authors of colour and LGBTQ authors that I was interested in reading, they often weren’t stocked in my local bookstores. There were books that I was desperate to get my hands on but didn’t pick up for years for this reason. So I started to use online shopping to get my hands on these books, and it’s been a great help in diversifying the books I buy and read. I also try to keep track of the books that I’ve bought in the year, and if it looks like I’m a bit short on books by authors of colour, I’ll use online shopping to even up the scales. I have also started to pay closer attention to how well the bookstores that I frequent have been doing on the diversity front –  some seem to actively try to ensure that they are carrying and supporting books by diverse authors, while others do not.

By this I mean, take a moment to think about how trends in your own media consumption may reflect inequalities in the industry that you want to see changed. For example, at the end of last year I realised that almost all of the books I had read on religion in 2014 and 2015 had been by white men (with two exceptions by men of colour). What?! No women, at all, with one book by a man of colour in each of those years. And unfortunately, there were definitely books by female writers that I was neglecting on my shelves, for no good reason! So this year, I aimed to deliberately include more women and people of colour in the books I read on religion this year. So far, I can happily report that this has been going pretty well!

Another example is, when I began thinking about the diversity in literature, I was prioritising both authorship and representation equally. To my mind, a ‘diverse book’ was any book that had an author and/or a protagonist who is a person of colour, has a disability, or is a member of the LGBTIQ community.

Until I saw this: 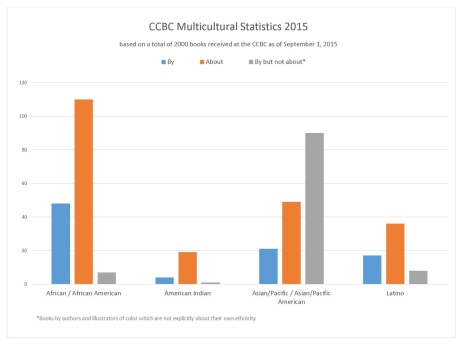 What this graph basically shows is that diverse racial representation in youth literature is at least twice as likely to be produced by authors who are not from that racial group. (And by the end of 2015, the gap actually increased.) And, while these statistics can’t confirm this, it’s likely that the majority of the authors that are benefiting from this discrepancy are white. As appearing diverse becomes more lucrative, it becomes an opportunity for privileged writers (and publishers) to exploit rather than fundamentally challenging white supremacy within the publishing industry. (And we’ve certainly seen this dynamic in more shameless ways as well.) This was incredibly disheartening for me, particularly as someone who found so much solace in young adult fiction growing up but didn’t think about the ways that it failed it represent me until much later. Seeing this graph permanently shifted the way I think about ensuring diversity in my reading. While I will still read  books by white, straight, and cisgender authors with diverse protagonists, they don’t count when I’m looking at how diverse my reading is. Authorship, rather than representation, takes priority for me at the moment.

Also, on an anecdotal note, I’ve always felt that it was easier to find authors of colour in contemporary young adult rather than speculative young adult fiction. I much prefer the latter, so I often relied on other genres to find books by authors of colour that I was interested in reading. But as someone who cares deeply about seeing young adult literature improve (for the sake of marginalised communities, as well as all young people) and knows the buying power that the genre has, this graph emphasised for me how that isn’t really enough. With a bit more attentiveness and digging through Goodreads, I have found more books by young adult authors of colour and am really enjoying the ones I’ve been reading so far.

Support what you love

As someone who spent her teenage years deep in fandom I’m pretty enthusiastic when it comes to supporting my faves, whether it’s live-tweeting television and podcasts (sorry not sorry), aggressively liking posts from promotional Facebook pages, or sharing the things I’m enjoying on Instagram. This takes on greater importance when it comes to diverse media.

It may seem like a small thing, but it can snowball to have a pretty significant impact. It’s no coincidence that the overwhelming success of Scandal, in large part powered by its Thursday night domination of Twitter, made room for other television shows with black women in lead roles, such as Sleepy Hollow, Minority Report, Empire, and How To Get Away With Murder. When Scandal began airing, it was the first network drama in almost forty years to star an African American woman. It was only given a seven episode run for its first season. Now, it has encouraged many other networks to consider projects with black female leads. While the progress has certainly been imperfect (Fitz is a garbage monster, I am so glad I stopped watching Sleepy Hollow before they shoved my beloved Abbie to the side, and it is a little disappointing that many of these shows rely on male and often white co-stars), there has been progress here that hopefully can continue being built upon in the future. Smaller-scale creators have also identified this kind of support as being vitally important. Nayyirah Waheed recently raised awareness about the #digitaliscritical campaign, which advocates for people to write and share online reviews for independent writers of colour.

Now, this isn’t some ironclad imperative to take to social media if that’s not your thing. Supporting the media you love can take all sorts of forms and should always be loads of fun. For example, this year I tried to make sure that half of my gifts and personal recommendations to friends and family featured diverse creators. It’s been a fun and interesting way to challenge myself to think more creatively about what the people in my life would enjoy. Just give a bit of thought to how you already share what media you love with others, and make sure that you’re including diverse media in that.

Obviously, there’s no perfect way to approach these issues and there are always going to be challenges. For example, authorship and representation are usually relatively easy to make note of, but there are other elements of diversity in media creation which are important too. Unseen contributors to the creative process – such as film and television writers, directors, and producers, or the staff of publishing houses – can make the process of evaluating diversity in media and transforming the landscape of the entertainment industry much more difficult.

But given the significant barriers that diverse creators face to having their work published and publicised on the same scale as white, straight, cis, and able-bodied writers, I think it’s worth our time to think about how we can show our support and play a role in improving diversity in media using the small and imperfect power that we have.